← back to
Jalapeno Records
Get fresh music recommendations delivered to your inbox every Friday. 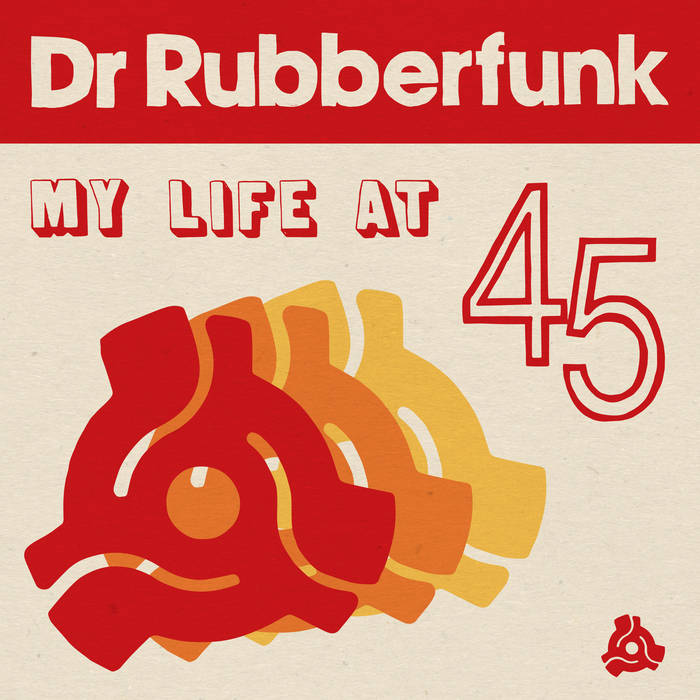 mister salt Superb slice of modern funk. Some brilliant individual tracks on here and also sounds great as a whole album experience with a coherent flavour running throughout.
Waiting for the vinyl to be released then it’s going straight in my party box. Favorite track: Longshore Drift.

Dr Rubberfunk might not be medically trained, but he does know a thing or two about treating your ears, as he returns with his fourth album 'My Life at 45'.

The eagle eyed will have spotted the connection to the good Doctor's second album – 'My Life at 33' - and fans can do their own maths as to when they should expect the final RPM-punning release in the trilogy.

Having established himself in funk, soul, blues and jazz circles with a ton of high calibre releases, the good doctor holds a reputation for quality productions, with a hands-on approach, both in front of, and behind the mixing desk, as an accomplished multi-instrumentalist and producer.

The new album brings together stunning vocals from John Turrell, Izo FitzRoy and Stephanie Whitelock, whilst the instrumental tracks, showcasing the talents of long-time collaborators Jim Oliver, Jonathan James and Ben Castle, make it clear just what a crack production outfit the Doctor has put together.

Pulling together tracks from the popular 'My Life At 45' 7" inch series, the album also features a new mix of 'How Beautiful' alongside four brand new tracks!

Simon Ward began DJing in his Dr Rubberfunk guise in 1992, releasing his debut 12” in 2001. He has since produced 4 artist albums; ‘The First Cut’, ‘My Life At 33’, ‘Hot Stone’ & most recently 'My Life At 45, alongside remixing & producing numerous artists, including Izo FitzRoy's debut LP 'Skyline'.
He's DJ'd from NYC to Moscow, and appeared at Glastonbury, Bestival & The Big Chill. ... more